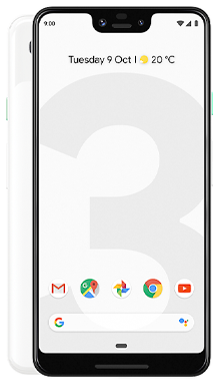 Customers are the focus of everything we do here at Metrofone, and with that in mind, we are striving to bring you the most comprehensive range of choice when it comes to handsets and the pay monthly deals that go with them. This means you have literally hundreds of combinations to choose from so that you can build yourself a perfect package. Everyone is different, and there the handset we want varies too, which is why we have built a huge stock room and filled it with the widest variety of phones from all manufacturers.

Google is most famous for being the world’s biggest internet search engine, but they actually have many strings to their bow, including making technology-packed mobile phones. The Pixel range of phones are their current offerings, but it might surprise you to learn that they have actually been in the mobile phone area since 2006 when they purchased Android Inc for the sum of $50 million. Their initial handsets were in collaboration with HTC, which is perhaps why people are unaware that their history dates back so far. Their biggest handset track came with the Nexus range of handsets, which again lacked the leading ‘Google’ in most of the branding so people would be forgiven for not realising their connection.

Since 2016 they have been all about the Google Pixel and this time they ensure that their trademark name is featured on all of the branding and advertising, so there is no doubt who is behind this range of handsets. The latest Google handset, whether they remain the Pixel range of not, will always have space on our shelves, so you have a great choice from their most up to date handset to some older, but really well-constructed handsets that we know are still going to be perfect for many of our customer’s needs.

What you might also not know about Google, as we touched on earlier is they still remain the owners of the Android operating system to this day. So that purchase in 2006 certainly set them up for a strong future in mobiles. Of course, it is their Android OS that powers almost all mobile phones that do not belong to either Apple, Windows or Blackberry. Android is a massively popular system, so it stands to reason owning it means you are going to be able to produce some pretty clever mobile phones hat harness the best of the software.

As with most handset manufacturers, Google is responsive to the current trends among users, which means the Pixel 3a, for example, was released when larger handsets with infinity screens were trending. It features a 6-inch screen with a resolution of 1080 pixels by 2160 pixels at a PPI of 402 pixels per inch. Now, this is the perfect size and spec for using streaming services on the go, as it plays television or movies perfectly. The onboard sound systems are also first-rate, so you get the home-based cinema experience from your mobile. It also aims to please those that enjoy a solid camera performance bringing a 12.2MP rear camera and 8MP selfie camera to the party.

When it comes to hooking up your Google handset of choice with the best pay monthly deal for you, then we are also confident that we have done the hard work, so you get a substantial range of choice. Our exclusive network partner EE has given us access to the best in pay monthly deals with a range of options meaning you can find the perfect deal for you, and they have generously added some amazing network gifts.

One of the primary reasons we work with them is because they have the widest coverage maps of any provider, and we want to make sure that whether you are one of our rural or urban based customers your handset works no matter where you might be. This is not just about calls and texts we want to make sure you also have 4G coverage as we understand how frustrating it is not to be able to use your handset fully due to a lack of service.

There are loads of deals to choose from, and we have also worked hard to get a good selection of deals with no upfront cost as we know that this is a popular choice when it comes to affording the handset you really want at a monthly price that suits your pocket. So have a look at the deals attached to the handset of your choice and see what options suit you best. You will want to look at the level of data offered, and make sure you can get a deal that offers slightly more than you use on average. Data chargers for users going over their allowance are expensive, and we want to help you avoid that where possible.

You will also find a range of cashback options on some of the deals which give you even more for your money. There are two types of cashback deal, those which are automatically applied meaning you do not need to worry about it your discount will automatically be applied, and those that you will need to claim once the contract is up and running. Don’t worry, though as details of how to claim will be provided.

So if you fancy one of the Google handsets, have a look at the product page for that phone and learn more about it. Once you place your order, we are able to get your handset shipped for free on next working day delivery so you won’t even have to wait to get up and running. Any handset or product we have in stock will be shipped on that basis; we just cannot offer it on pre-orders.

If you have any questions about any of the handsets that we have on offer, or want to learn more about any of the deals we have, then please do give our UK based customer service team a call, and they will be happy to help you. They have knowledge of our whole product range and can be reached at 0333 900 1144.