Samsung Galaxy A50 Black on EE 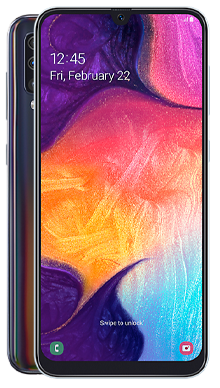 If you are looking for a stunning Android handset from one of the best UK mobile phone manufacturers, then the Samsung Galaxy A50 could be the perfect choice for you. 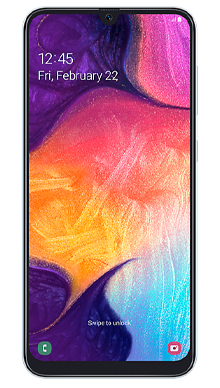 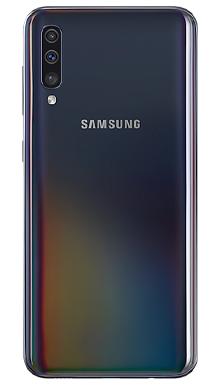 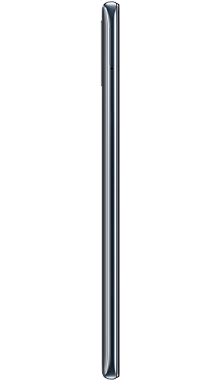 If you are looking for a stunning Android handset from one of the best UK mobile phone manufacturers, then the Samsung Galaxy A50 could be the perfect choice for you.
Product Details View Deals
Our Best Selling Deal
£0 UPFRONT COST
£18.50

Select your desired options to find the best Samsung Galaxy A50 deals for you. 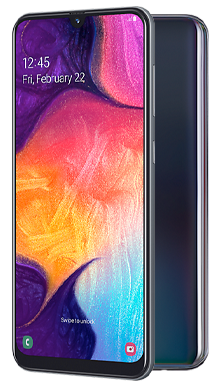 When it comes to making mobile phones, there is nothing Samsung doesn’t know and ranks as one of the top three in the world. Consistently producing stunning handsets that offer a vast range of choice to users with phones at all levels from high-end to budget. The A series sits at the top of the middle and provides a lot of choice in functionality to users who love the Samsung brand.

Samsung Galaxy A50 Design and Display

As soon as you pick up the Samsung Galaxy A50, you will feel the build quality from Samsung. The handset is a larger style glass and plastic construction, and the front screen features Corning Gorilla Glass 3 for added protection. It weighs just 166g which is a nice feel in the hand, not too heavy but weighty enough to feel well made and robust. The screen is the main feature, and no space has been wasted with an infinity screen that really looks the part. The front camera is concealed in the neatest of water drop style notches that keeps it small and out of the way but still fully functional.

The handset has a 6.4-inch screen which is a larger but popular phone size. There is a growing trend to use handsets to play games and stream movies, and for this reason, the larger screens are proving popular. The screen is Super AMOLED and boasts 16M colours. There is 1080x2340 pixels which give an 84.9% screen to body ratio and a 403ppi with 19.5:9 aspect ratio making it perfect for private movie screenings.

When you turn the handset over you will see that the back has been well thought out and there is a triple camera arrangement that runs vertically down one side, with the LED flash underneath. Other than that the back is colour matched and features only the Samsung branding as the fingerprint scanner has been moved to an onscreen offering on the front. For those who like a colour choice the handset is being sold in four different colour ways, black, white, blue and coral (pink), giving you plenty of colour coordination choice.

We know that audio is something Samsung does well and this handset does not disappoint. Whether you want to make calls on handsfree or stream music and video the sound quality from the loudspeaker is excellent, with clarity and no distortion. Of course, the room will need to be reasonably quiet, but if you need to use headphones, then you will have a good choice. The Samsung Galaxy A50 features a standard 3.5mm headphone jack which is good news for those users that love their wired cans, and if you prefer to be wire-free, then you can use wireless ones. The handset comes with standard wired earbuds from Samsung.

As already mentioned the Samsung Galaxy A50 has three lenses on the rear which means you are looking at a really strong photographic performance. There is a lot of software magic built in as well so you can do your best pro-photographer performance and show off to your friends. The rear camera features a 25 MP, f/1.7, PDAF, with 8 MP, f/2.2, 12mm (ultrawide) and 5 MP, f/2.2, depth sensor to complete the deal. The front-facing selfie camera is a whopping 25MP, and both cameras offer HDR. You can also record video from the front or back camera and this records in 1080p@30fps for a strong performance.

Being one of the higher spec A series handsets there is a nice strong hardware set supporting this phone. The chipset is the Exynos 9610 (10nm) with the Octa-core (4x2.3 GHz Cortex-A73 & 4x1.7 GHz Cortex-A53) CPU and Mali-G72 MP3 GPU which means this handset is built to work hard. Being an Android handset, you would expect to find the latest software so you will not be disappointed as the handset comes running 9.0 Pie.

The handset comes in two sizes with either a 64 or 128GB of memory depending on your preference, and this can be expanded further as you get the removable microSD card slot which means you can add up to 512GB more to give you plenty of storage capacity. The RAM will either be 4 or 6GB depending on which handset you have chosen.

A handset like this needs a good size battery, and the 4000mAh offered everything you could need. It enables you to take the handset out and about for a long day of work and still have enough charge to get back to the power in the evening. It is also well placed to cope with running multiple apps at a good speed without lag. The handset is cabled charging only but does offer fast battery charge which makes the job quick and efficient.

If you are looking for a handset that is practical and fuss-free but gets the job done, then this could be the handset for you. It is well designed and looks great and comes with a range of really great prices that will not blow the budget.

Giving our customers the broadest range of choice when it comes to handsets is our aim here at Metrofone, so we strive to bring you as many different handsets as possible. Once you find the best handset for you we also then bring you a choice of pay monthly deals that offer a range of options and prices so you can create the perfect deal for you.

We only work with EE because we want to provide you with the best in network coverage so that you have access to data and call making ability no matter where you might roam.

If you would like to know more about the Samsung Galaxy A50 or any of the other great deals that we offer then call our customer service team on 0333 900 1144 today.

Frequently Asked Questions About The Samsung Galaxy A50

Q. How do you screenshot on a Samsung Galaxy A50?

A. Press the power button and volume down key together and your screenshot will be taken. This will automatically save down to your photo gallery.

Q. Is the Samsung Galaxy A50 waterproof?

A. No, the A50 is not waterproof. We wouldn’t suggest taking it in any water as it will most likely get damaged.

Q. Does the Samsung Galaxy A50 support wireless charging?

A. The A50 does not support wireless charging but it does support fast charging at 15W.

Q. Is the Samsung A50 compatible with 5G?

A. No, the Galaxy A50 is not compatible with 5G connectivity.

Q. How long does the Samsung Galaxy A50 battery last?

A. The Samsung A50 has a 4000 mAh battery with 15W fast charging. This is an incredibly good battery and will last you around 5 hours constant use. With average use, this should last all day.