14 Nov First Cities to Receive 5G in the UK Announced

EE have announced the first six cities that will receive 5G WIFI in 2019. London, Manchester, Cardiff, Belfast, Birmingham and Edinburgh will all receive 5G by mid-2019. EE also announced a further 10 Cities will also get access to by the end of 2019. EE state that Cities that gain 5G will get 10 times faster Data downloads. Other networks are currently trialling 5G and also plan to roll out in 2019.

The next Ten cities to get the new faster 5G WIFI will be; 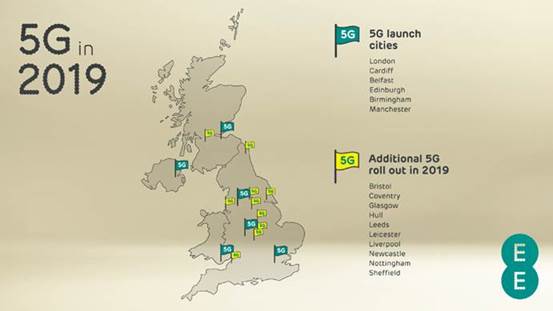 Customers that have access to 5G can expect better speed and reliability. Customers should expect to spend a bit more for 5G due to its faster download capabilities and browsing speeds.

O2, Three and Vodafone are all trialling the new 5G technology. Three have already confirmed they are preparing their 5G network by installing new hardware which will work with existing and future technologies.

Vodafone have stated their trial in Manchester is now part of its commercial network and similar technology will soon exist in a further 5 cities.

The government have written to all networks warning that companies building 5G networks should take extra care when selecting which hardware they choose to use. A review of which hardware is used started in July and could potentially delay the 5G rollout. The review specifically targeted how much hardware could be used  from Chinese technology company Huawei. Huawei have already been restricted in other countries including the USA and Australia